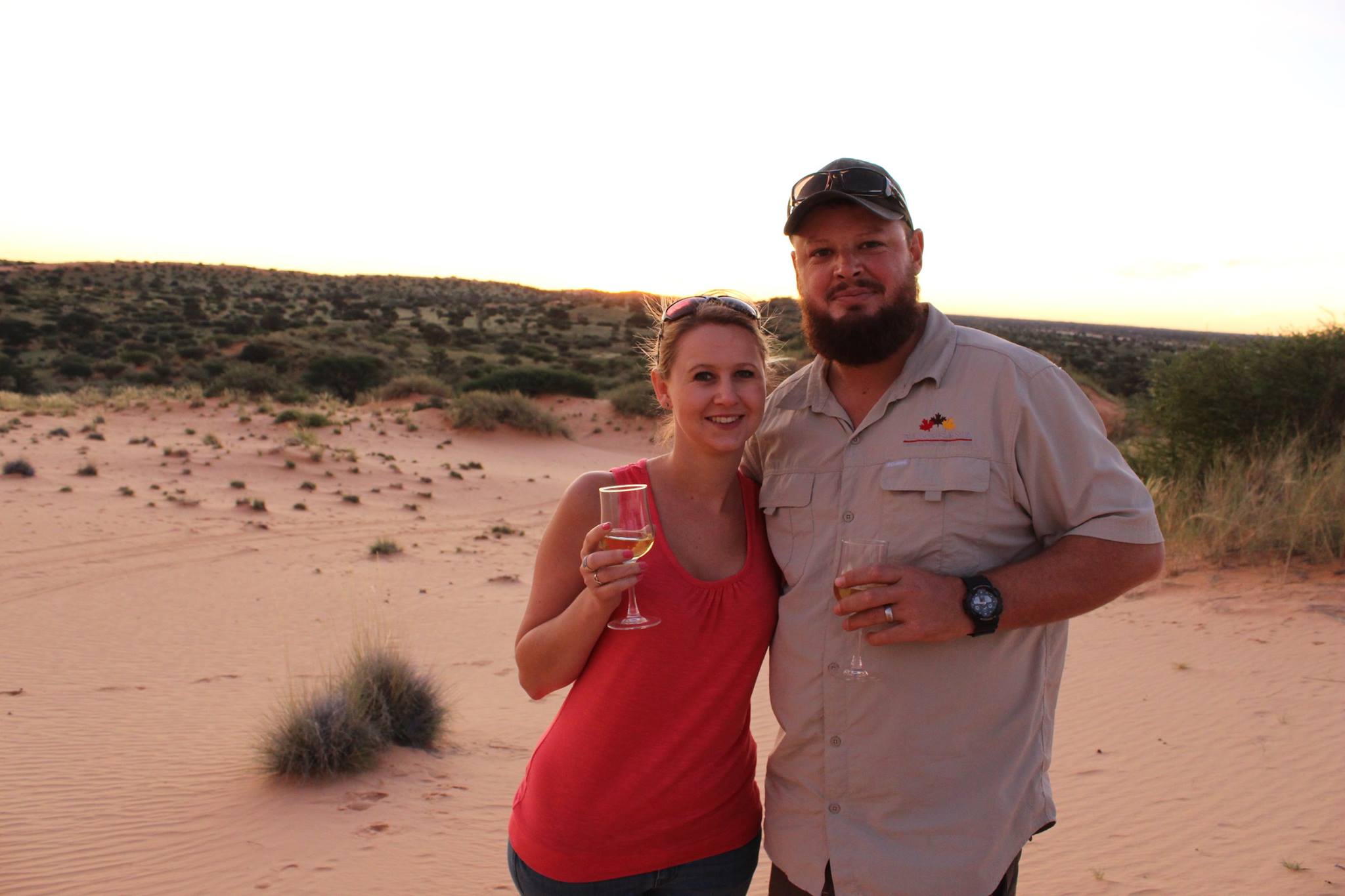 Wow! I don’t even know where to begin. This place is just magnificent and exceeded all our expectations and more.

Kgalagadi Transfrontier Park is situated in the Kalahari Desert region of South Africa and Botswana and is about a nine-hour drive from Pretoria on the N14.

A few years ago my husband came across a Facebook group called Kgalagadi Sightings where visitors to the park posted their personal photos of their experience in the park. We fell in love with it and could not get enough of the photos of all the lion, cheetah, leopard and spotted hyena.

So we started planning our two-week trip to the South African side of the park mid-2015. We decided to visit the park during April/May 2016 as it was is just after the rain season and temperatures were bearable and the evenings a bit cooler. We started buying our camping gear … As it was our first visit to the park, we decided to book accommodation at the three main fenced rest camps namely Twee Rivieren, Nossob and Mata-Mata, and to do a three-night, four day 4×4 eco-guided tour en route to Nossob.All these rest camps comprise of very neat ablutions and laundry areas and even have electricity connectivity. Twee Rivieren has a restaurant and tiny shop and there is cell phone reception too.

Our holiday began on 22 April; we left Centurion very early that morning. We checked in at Twee Rivieren for the next 2 nights and days. Twee Rivieren is situated on the bank of the dry Nossob Riverbed. We travelled up the Nossob River bed between Twee Rivieren Camp and Nossob Camp, we left our camp early at 07:00 and was surprised to see 2 lionesses’ on the dunes not long after we left our camp, we stopped for a few minutes, but they disappeared behind the dunes and we decided to drive on, 10 minutes later we came across a few cars in the road, next to the road a lioness and her 2 cubs was drinking water in a puddle, I was ecstatic to see the 2 cubs so close to our car. The highlight was when I noticed the most beautiful lions walking in the direction of the mom and cubs, went and paused for a rest period on one of the Kalahari’s idyllic red dunes with the morning sun in his face, I snapped so many photos of that beautiful moment. We saw big herds of springbok, oryx, blesbuck, blue wildebeest mainly travelling on their own, vultures, a small group of meerkat playing, but no hyena, cheetah or leopard sightings.

We stayed another night at Twee Rivieren and from there, prior to our visit to the park we booked a 3 night, 4 day guided 4×4 eco trail group tour across the red dunes to Nossob, where we stayed at 3 unfenced camps, without electricity, running water and a long drop toilet, but that was all part of the experience. During our trip, we were taught a lot about the dunes, fauna and flora in the Kalahari desert. I definitely recommend the eco-tour. We didn’t see lots of game but saw ostrich, kudu, lion and lots of birds.

On day 6 we arrived at Nossob camp, we started the day off by just relaxing at camp for a change. The following morning, we left early to see if we could spot some hyena, as we were informed at reception that there is a den not far from camp, so we headed in the direction of Polentswa waterhole. We didn’t drive far and came across 3 lions having an early morning nap in the sun on the road near Bedinkt waterhole. We couldn’t believe it, we were the first car to view the sighting and had the 3 all to ourselves for nearly 20 minutes. We drove off and had coffee and nice rusks in the bakkie at one of the many waterholes along the road, before driving back to the camp for an afternoon nap. The following morning, we left as the gates opened at 07:00, made sure we are the first vehicle to exit.

Today is the day we are going to spot some hyena I told my husband, full of optimism we left and drove for about 10km next to the Nossob riverbed heading again in the direction of Polentswa waterhole when I spotted 2 creatures in the distance walking very fast, grabbed the binoculars and yes, it’s 2 hyena. I was in my element as I have never seen a hyena in the wild. We drove to get ahead of them, but they were still very far in the distance walking in the riverbed, and then they turned towards us and walked straight up to our bakkie and sniffed on the bakkie’s tires. What and awesome experience to see them so up and close. My day was made! Once again we headed to a waterhole and had our daily coffee and rusks in the bakkie before we drove on for some more game viewing and came back around 15:00 and set up camp and lit the fire. Nothing can compare to the peace and quiet and the night sky in the Kgalagadi with distant jackal calls in the distance.

On day 8 we headed to Mata-Mata, situated on the bank of the Auob River, this side of the park borders Namibia to the west. Mata-Mata offer 2 hour long guided night drives, we saw bat-eared foxes, muskeljaatkat, spring-hare, scrub hare, Cape fox, African wildcat, jackal and night owls and lots of antelope. The rest of our trip we stayed at Mata-Mata and travelled up and down the Auob Riverbed  and saw Masego the famous young leopard hunt an African wildcat in a tree next to the road after exploring various trees looking for prey, we followed her on this particular day for more than an hour between Dertiende and Veertiende boorgat.

The riverbed is also home to large herds of giraffe and we came across them everyday sightseeing, we saw Masego the leopard almost every day. One morning on our daily route we saw 2 hyena walking in the direction of Veertiende boorgat and followed them slowly, they reached the waterhole and both jumped in the water trying to cool off while drinking water. This was so interesting to watch as they were playing. Like at Nossob they walked straight up to our bakkie and sniffed on the wheels but this time biting at it with their sharp teeth, my husband had to pull away to avoid any damages to the tires. We spent the last two days at Twee Rivieren before heading back to Pretoria. During our trip, we were lucky enough to see a total of 32 lions, some leopard and two cheetahs in the distance near Mata-Mata, among others. 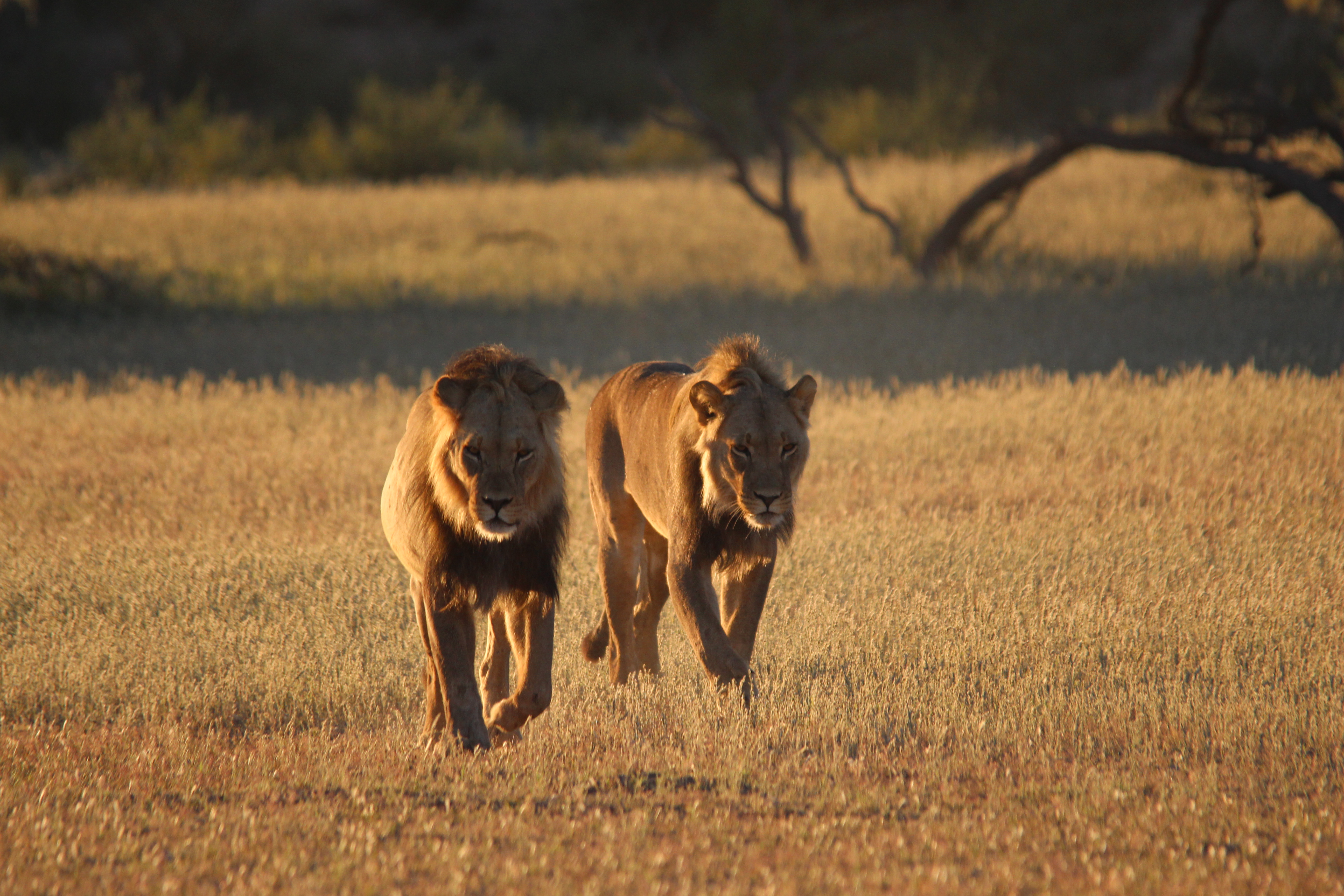 All three rest camps have little shops with all necessaries, a petrol station to refuel. Twee Rivieren and Nossob have swimming pools. We bought delicious freshly baked “rooster brood” every night while at Mata-Mata and Nossob. You can place your order at the shops in the morning and collect your items after 06:00. At Mata-Mata there is a little shop across the border on the Namibian side that sells delicious lamb chops and boerewors at a very good price. You are allowed to cross the border without a passport to visit the shop, just inform the security at the border.

Kgalagadi is an absolute must for bird lovers, we saw yellow-billed kite, black-breasted snake eagle, tawny eagles, bateleur, pale chanting goshawk, lanner falcon, Namaqua sand grouse, Namaqua Dove, spotted eagle owl, veer aux eagle owl and tow species of vultures. The camps are also home to yellow mongoose and ground squirrels. They are not shy at all and will even walk up to your camp chair if you sit very still. One even tried to take a dead butterfly out of my hand! Big herds of gemsbok and springbok can be spotted throughout the park along the roads and at waterholes. Unfortunately, we didn’t see meerkat up close, but maybe next time.

I can definitely say that this breakaway to the Kgalagadi Transfrontier Park was and will be remembered as one of our most memorable and relaxed holidays yet. We returned revitalised and the park definitely exceeded our expectations. The staff is friendly, fellow campers greet you in the morning on your way to the ablutions and on the roads. People are very considerate and everyone gets a chance to view a sighting. We are already planning our next trip with friends to the Botswana side of the park this year April. We cannot wait to put our feet in the sand and get that overwhelming feeling of joy that comes with it.